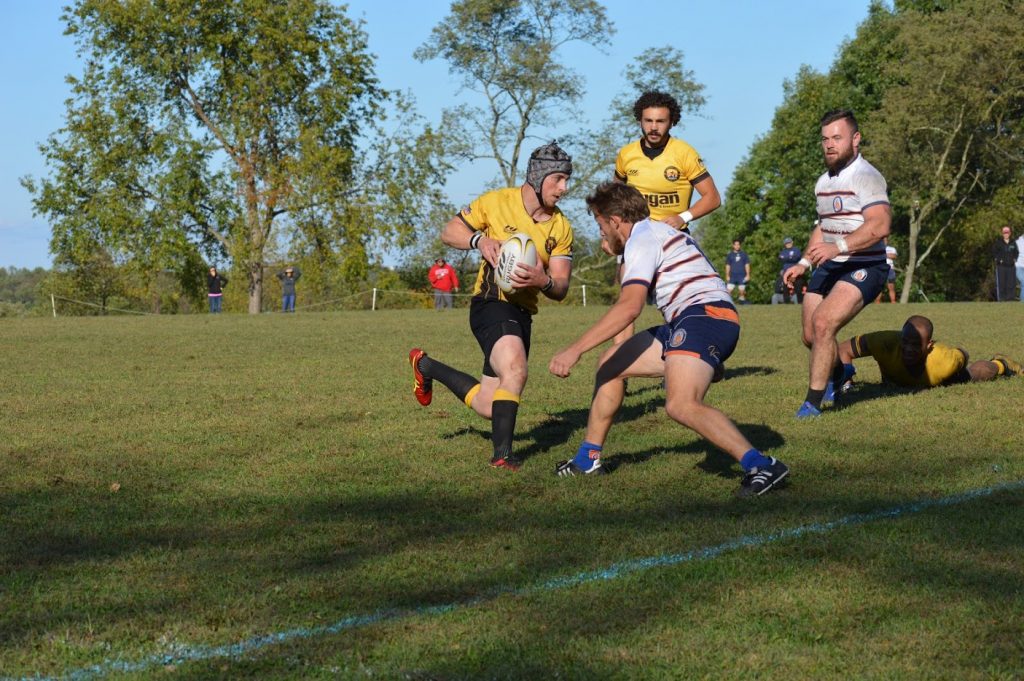 Pittsburgh, PENNSYLVANIA – After this past weekend’s 60 – 5 dominating win over Chicago’s Southside Irish Rugby Club, the Forge D2 Men have finished Midwest league play undefeated, posting an impressive 6 – 0 – 1 record and earning the top seed in the Eastern Conference. With that seed, the Forge are guaranteed home field advantage through the first two rounds of the Midwest Playoffs.

During their first season as a club in the fall of 2018, the club earned a very respectable 5 – 3 record during league play and a birth to the Midwest playoffs as a Wild Card. With that seed, the club traveled more than eleven hours to Cottage Grove, Wisconsin and were handed a humbling 34 – 5 defeat. The next spring spring, determined to better themselves as a side, the Forge participated in the Midwest’s  Thunderbird Elite Cup playing several Division I clubs including Scioto Valley RFC, the Cincinnati Wolfhounds and the Chicago Griffins, earning a 2 – 1 record against those sides. The club’s coaches and captains were hoping that the high-level competition would improve the side’s skills and mental toughness.

The fall league competition would be revamped for the Forge as the teams from upstate New York were replaced with Midwestern sides from the Chicago area; however, the Forge would open the season against a familiar foe, the Cleveland Crusaders. Last season, the Forge would lose both games of the home and away series with the Crusaders by a combined three (3) points. The Crusaders go on to eventually win the coveted Midwest Championship at Division II.

This season, the Forge would be tested early playing the defending Midwest Champs in Cleveland right out of the gate. Thanks to stellar team defensive play and tries from scrumhalf Rous Kluever (PITT) and Sam Angelo (SRU/ IUP), the Forge was able to exact revenge on their rivals to start the season with fantastic 15 – 12 win over the Crusaders on the road. This important win would set the tone for the 2019 fall season.

The next weekend, the Forge would come home to play a new and unfamiliar foe, Lincoln Park Rugby. It was an extremely hot day which evened the playing field as both sides struggled to stay hydrated and move in the heat. In the end, the Forge were able to get tries from Rous Kluever, Alex Gordon (SRU), Frank Cacciotti (Geneva), and Craig Williamson to defeat Lincoln Park by a score of 29 – 20 and improve to 2 – 0 on the young season.

On September 21st, the Forge would travel to Indianapolis, Indiana to take on the Impalas. These two clubs met in the spring during the Thunderbird Cup with the Impalas defeating the Forge on home soil in Pittsburgh. The spring game proved chippy and physical and would be the first of match of a budding rivalry between Pittsburgh and Indianapolis.

On this day, the Forge would battle hard in a hostile Indiana environment to earn a 26 – 26 draw. Tries were scored by Andrew Chapman, Tyree Massie (Cal U) [2], and Tony Wilson (Woodland Hills HS). With the bonus point for tries scored, the Forge was happy to leave Indiana with three points earned out of a possible five given the circumstance.

To close out September, the Forge would host the Chicago Blaze, another unfamiliar foe from the City by the Lake. The Blaze were 3 – 1 and at the top of the table at the time and would be yet another great test for the Forge men. With tries from Chris Austin, Rous Kluever and Neil Reynolds (UPJ), the Forge would cruise to a 20 – 5 victory and take over first place in the Eastern Conference for the first time with a 3 – 0 – 1 record.

Just two weeks removed from playing the Impalas in Indianapolis, the Forge would host them in Pittsburgh on October 5th. Fresh off the draw from September, the Forge were looking defeat the Impalas handily on home soil. Unfortunately, like most good rivalries, this match would not be so easy. The sides battled back and forth the entire match, with the Indianapolis holding a one-point lead (17- 16) at the half. In the second half, when one side would slot a penalty kick, the other would as well; when one side would find the try zone, the other would as well, too.

With just five minutes remaining, the Forge found themselves down by six (30 – 24) before loose forward Tony Cardamone (SRU) would find the try zone and inject life into his teammates and the home crowd. After the conversion was missed, the Forge were still down by one point (30 – 29), but savvy scrumhalf  Rous Kluever would find the try zone with just one minute remaining to stun the Impalas and secure the win for the Forge. After the Andrew Knuttel (PITT) conversion, the final score read 36 – 30. Knuttel would be named the Man of the Match thanks to his four (4) penalty kicks and two (2) conversions for 16 points on the day. Other tries were scored by flyhalf Tyree Massie and center Billy Gordon (Villanova).

To close out their home schedule, the Forge would host the Cleveland Crusaders to close our their home and away series with playoff implications on the line. After a quick initial score by DC MLR’s Zach Forro to put the Crusaders in the lead early, a try by center Craig Williamson, followed by a conversion and a couple penalty kicks by Andrew Knuttel saw the Forge take a 13 – 5 lead into the half. After Williamson’s second try of the game at the fifty-minute mark (converted by Knuttel), the Forge were flying high with a 20 – 5 lead and time dwindling down on the Crusaders. After a couple of yellow cards gave the Crusaders new life, they would battle back to close the gap to one point (20 – 19) at the seventy-minute mark. Forge prop Christian Mans would extend the lead at seventy-eight minutes, but a try in extra time would give the Crusaders a chance to win the game on the conversion with no time remaining. Thankfully for the Forge, the kick would fall short and the Forge would sweep the season series against the Crusaders by a score of 25 – 24. Similar to last season when the Crusaders swept the Forge by three (3) points, the Forge were able to turn the tables and sweep the Crusaders in 2019 by a total of four (4) points.

To close out league play, the Forge would travel to Chicago to take on the Southside Irish. Neil Reynolds (3), David Ashline (PITT) [2], and Bryce Markwardt (SRU) [2], would all put down multiple tries on the way to a convincing 60 – 5 win. With the victory, the Forge would finish the season with a 6 – 0 – 1 record and secure the top seed in the Eastern Conference.

This weekend, the Forge will host the number two seeded club from the Chicago sub – league, Lincoln Park Rugby. The game will be held at the Forge’s home pitch at Phillip Murray Field with a 2:00 pm EST kickoff scheduled. The address for Phillip Murray Field is 725 Mountain Avenue, Pittsburgh, PA 15210. The game will be followed by the Forge’s third side hosting California University of Pennsylvania.

With a victory, the Forge would then host the winner of the other (Eastern Conference) quarter final match between the Cleveland Crusaders and the Chicago Blaze being played in Chicago. The Eastern Conference Championship will be held on Saturday, November 2nd. We welcome all fans of the Forge and Pittsburgh to join us for this weekend’s game, it’s the first senior men’s club playoff game hosted in Pittsburgh in nearly two decades.