PITTSBURGH, PA – The Pittsburgh Forge Women have secured a playoff position for the third consecutive competitive season!  Having been presented with a tremendous opportunity for success with the formation of the Midwest East Division 1/Division 2 Hybrid league, the Women entered the Fall of 2021 looking to make a statement in their return from the COVID-19 hiatus.  In a season which saw the Women matched up against old foes and new opponents alike, the Forge came out on top with an unblemished 4-0 record, with an impressive average margin of victory of 40.75 points per game!

However, this journey for the Forge Women began long before the Fall season kicked off. Their eyes have been focused on this opportunity since January, when they welcomed Head Coach Todd Fabec to the club. He understood the task at hand, and the potential that existed within the squad:

“I am honored to return home and have the opportunity to work with an outstanding club. The culture is spot on as the community shares and cares for one another. And, because the club has competed and won at the national level, there is a healthy balance to play fun, modern rugby. Coming through COVID-19 was quite a challenge. Yet, we did it smartly, took care of each other, and now find ourselves in really great shape moving forward. Both this season and beyond. It’s been awesome and I thank the community for giving me a chance to be a part.” 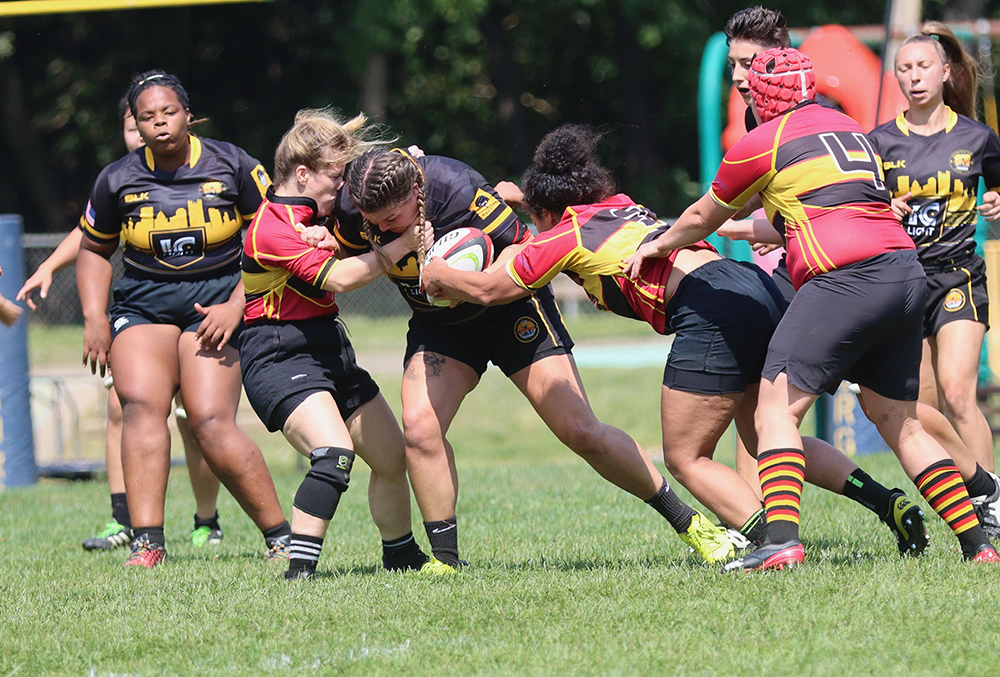 The Forge were able to exercise their adaptability in navigating the return-to-play COVID-19 protocols that were in place to ensure player and supporter safety after the 2020 hiatus: Zoom meetings in January, indoor cohort-branched skill sessions in February, socially-distanced outdoor training in March… all of which were approached with avidity from the team.

In late spring, the women had their first chance to execute their new game plan and skillsets, with back-to-back friendlies against Harrisburg RFC and Rochester Renegades!  Though the Forge Women fell to Harrisburg after traveling east to square up in a friendly yet competitive match, the women were right back at it the following week , this time emerging victorious at home against the Rochester Renegades. Both of these friendly encounters provided insight on areas that required more focus and attention before the Fall rolled around, and not once did the Forge hesitate to do what was needed to continue improving their game, as Captain Holly “Ripper” Ramey said so well:

“At the beginning of the season, with a challenging new schedule ahead of us, we came together and decided we would push ourselves to the highest limits. That night, every single player made the commitment to give it their all. You saw it in players coming to training early to run skills work. You heard it in conversations with teammates about strategy and technique. And you felt it on the field when we played not for ourselves, but for each other. All of our hard work has led to this moment. And we’re ready.” 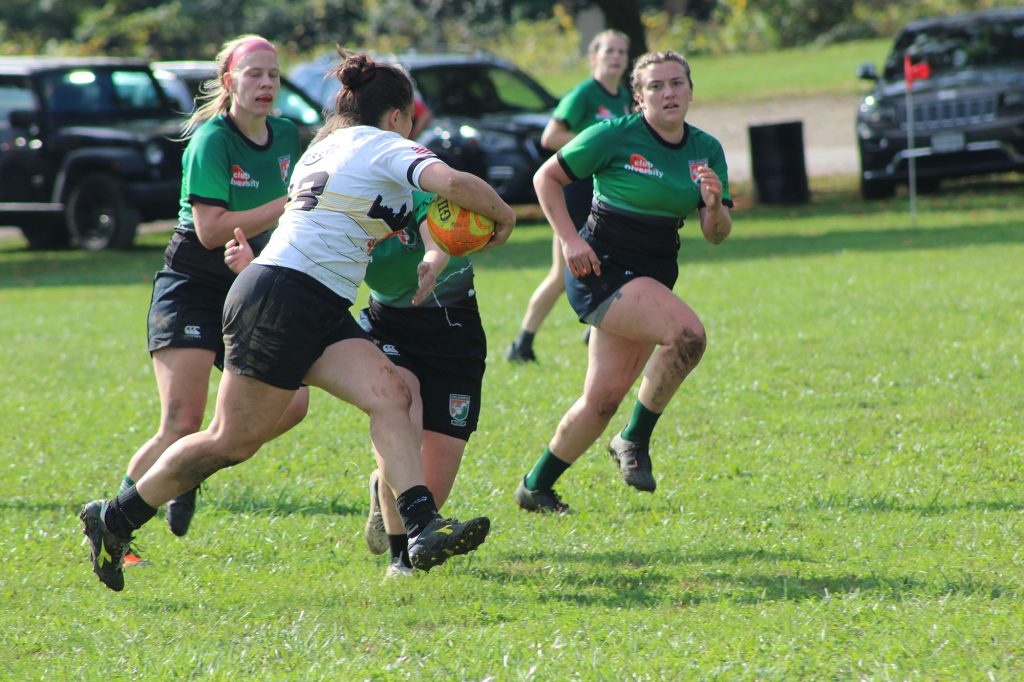 The women paralleled their on-field work ethic with focused recruiting efforts, and are fortunate to have grown their team throughout the past year, with the culture of the club and the sport of rugby proving, yet again, that there is a place for everyone! The Forge are thankful for their newly acquired talents – some with various athletic backgrounds: powerlifting, soccer, roller derby, and football- all of which have unique subsets of skills which transfer over to rugby quite nicely. The team would not be where they are today without the obvious dedication of its players, both experienced and new. Captain Karina “Strokes” Sarver spoke to this full-club effort that lasted all season long:

“We are so proud of the work that every player has put in as the team prepared to execute the 2021 D1/D2 hybrid season. This fall, we were able to highlight our developmental side, our Gold squad, in two matches. They won both. The sanctioned side, our Black side, was able to win the league with a perfect record. Now, we get to ride this momentum into the D1 Midwest semifinal match that is going to be held on our home pitch. We have elevated each other to get here; it’s time to keep grinding, keep rising, and take care of business on November 6th.” 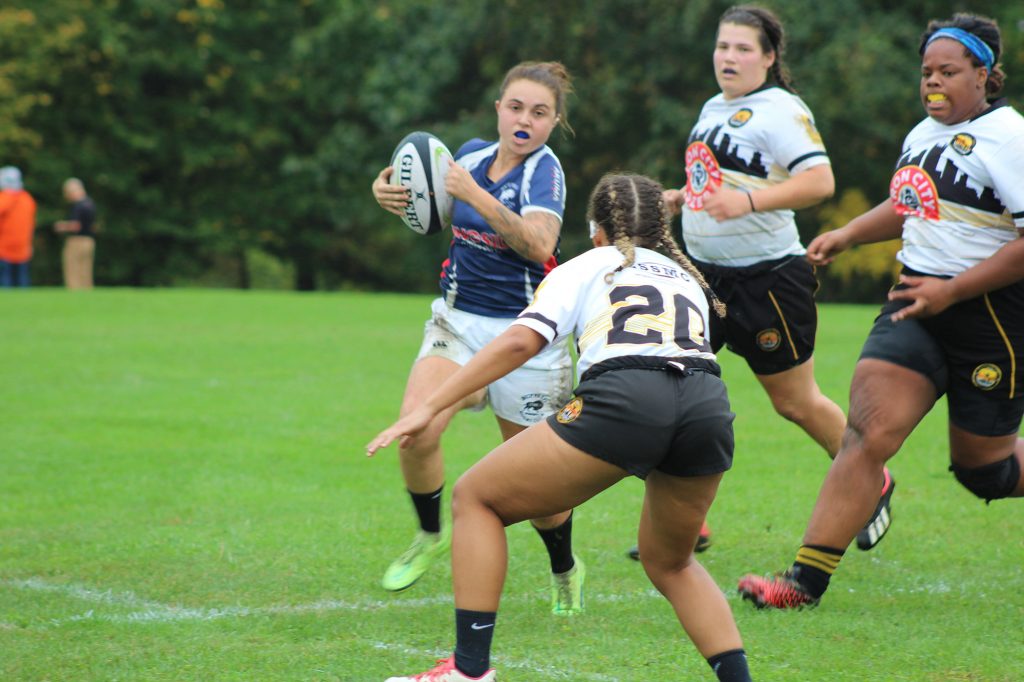 Jaisa “Twerk” Watkins breaking down to tackle a Buffalo player

The Forge capitalized on their roster depth all season, playing 23 women each match and consistently traveling with a loaded sideline of supporters as well. The team truly demonstrated their dynamism with no two rosters identical throughout the year. Within the new hybrid configuration, the women kicked-off their fall hosting Detroit (MI) and scored within the early phases of the match to seemingly set the tone for the entire season. Next, they traveled to Cincinnati (OH) to take on the Kelts and pulled off another meaningful win. In October, the women’s Black squad got to start the historic, rugby-filled Forge Day with a win over Buffalo (NY). Finally, they were off to Columbus to face the Squirrels (OH), who were also undefeated entering the match. By sticking to their game plan, the Forge triumphed once more and secured their place at the top of the Midwest East D1/D2, earning them a berth to the Midwest Division 1 playoffs!

As previously mentioned, the Forge were fortunate for the opportunity to feature their Gold side twice this fall – once at home to wrap up Forge Day against Kent State and once away against Columbus. Gold emerged victorious in both of these contests to accentuate the team’s undefeated record!

Next up for the Forge women are the Metropolis Valkyries (MN), seeded 2nd in the Division 1 West league, when on November 6th, the Forge will be hosting the Midwest Division 1 Semifinal as the higher ranked side! Be sure to show your support at Phillip Murray Field (725 Mountain Avenue, Pittsburgh, PA), with the action kicking off at 11:00am! The women have only been more dialed in with their training and show no signs of easing off the gas any time soon.