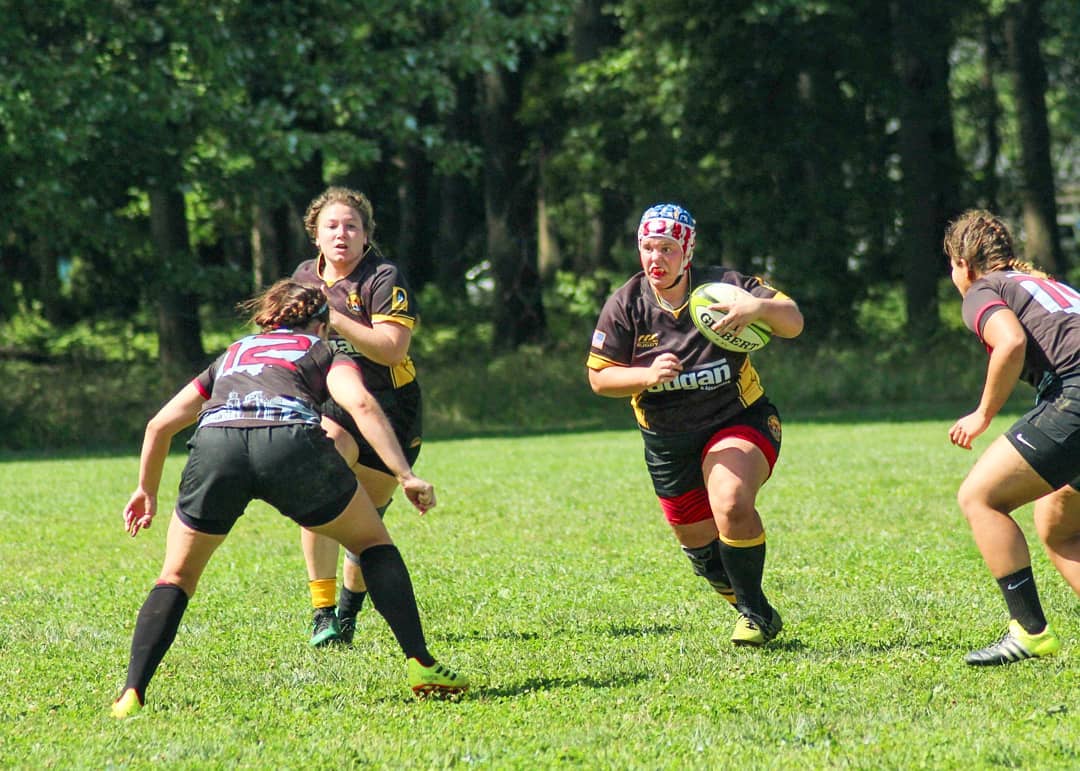 CLEVELAND, OH – On a warm and sunny morning, the Pittsburgh Forge Women traveled to the outskirts of Cleveland to test their mettle against the well established Cleveland Iron Maidens. Known for their strong offense that targeted the 5 meter channel, The Forge was up against one of their most challenging competitors yet.  The field conditions at Impett Park were fair: a seemingly wide flat field, slightly long grass, and a line of oak trees provided shade for those in need of a break from the sun..

The game kicked off at 12:00 PM sharp, with Cleveland receiving the ball off the foot of Ashley Chipps (#8).  A little less than five minutes into the game, The Forge capitalized on a Cleveland penalty at the 10 meter line.  Olivia Lindsay (scrum half) passed the ball out to a strong pod option and then received the ball back, inserting herself into hole in the defensive line, scoring the first try of the game. Maddie Miller (fly half) sweetened the first try by sailing the ball through the uprights.  The score was 0-7, Pittsburgh.

The Iron Maidens, true to their name, were not so easily bent by The Forge hammer.  By the 11 minute mark, they answered back with a try and conversion of their own. Cleveland’s Hailey Hodgson (lock), took advantage of Pittsburgh’s porous defense and went in for the try.  Cleveland made their conversion, sealing the score at 7-7.

At the 12 minute mark, Jessie Brewer (fullback) made a game saving tackle (the first of four).  In the midst of stopping the Cleveland breakaway, Brewer’s tackle resulted in head assessment for Brewer.  Mackenzie “Mack” Dirlam, stepped into the fullback position while Brewer stepped off.

Just six minutes later, the Pittsburgh Forge regained possession of the ball and marched down the middle of Impett Park.  Pulling in Cleveland players, The Forge was able to send the ball wide, to a powerful veteran group of players. Outside center, Hannah Zibert, drew in one of the remaining defenders, making contact and sending it out to lock, Nicole Beswick.  Beswick charged through a hole but was caught with a few meters to go. With Dana Zimmerman (wing) charging in, Beswick gave her a quick pass. Zimmerman was able to make those last few meters and touched the ball down, now raising the score to 7-12. The conversion attempt was unsuccessful.

Brewer, cleared to play, returned to the field and Dirlam stepped back off to the sideline.  Once again and for the last time, Cleveland answered Pittsburgh’s try with a try of their own at the 23 minute mark, scored by Jordan Costy (14).  They, too, were unsuccessful in their conversion attempt, leaving the score at 12-12.

With just 30 minutes into the match, The Pittsburgh Forge charged downfield, with eyes set on the try line. Chipps, at a near hobble, finished the charge with a try of her own in the left hand corner of the field, after bulldozing down Cleveland’s outside defense.  The kick proved to be elusive once again; the score now 12-17. Having accomplished what she set out to do, Chipps exited the field with Dirlam stepping on. The battle ensued, Cleveland driving hard for that give one, take one pattern that had been established in the first twenty minutes of the game.  By the half, neither team scored again; the score remained at a close 12-17.

With both teams re-grouped and somewhat refreshed, the two teams hashed it out once again.  This time, The Forge Women received the ball and for the majority of the second half, kept possession.  Beswick was instrumental in this second half, orchestrating the backs and forwards into a driving force that took advantage of Cleveland defensive holes.  On the outside, Beswick received the ball and drove into the Cleveland defenders. As she made contact, she once again set up a teammate for the try. This time, Chloe Correia (wing), took the ball in, raising the score to 12-22.  Miller was able to recapture the uprights, sending the ball right through. The Forge was now 12 points up.

The next fifteen minutes were a battle.  Cleveland stormed down the middle of the field, reaching The Forge’s five meter defensive line by sheer force of will.  Losing a player to a yellow card for a high tackle, The Forge were a man down while Cleveland gained momentum. The Forge, however, would not yield.  At the 69 minute mark,The Forge reclaimed the ball and steamed ahead. The tides had officially turned and within the next minute, Jamie “Boo” Filipek (inside center)  took advantage of a back peddling Cleveland defense. Sliding through a hole, Boo sprinted for 20 meters and in for a try. The score now was 12-29.

With five minutes to go, The Forge’s physical fitness and tactical subs allowed them to complete two more tries.  At 76 minutes in, Beth Rose (prop) side-stepped a Cleveland defender and sidled into the try zone with Miller completing the conversion. Three minutes later, The Forge displayed their skill with a polished quick ball: Lindsay to Correia to Brewer and then back to Lindsay for a 20 meter break away.  In the 79th minute of the game, Beswick gave a strong off-load to Dirlam who dashed 40 meters for the final try of the game. Miller topped the game with a strong conversion. The final score was 12-48.

The Pittsburgh Forge Women will be competing at Philip Murray Park against North Buffalo on Saturday, September 22nd at 11:00 AM.  This will be their home opener.