WEXFORD, PA – This past Saturday, the Pittsburgh Forge hosted the 11th Annual Steel City 7’s Rugby Tournament at McKinney Soccer Complex in North Park. The tournament was hosted for ten years by the Pittsburgh Rugby Club with this year’s installment being the first operated by the newly formed Pittsburgh Forge Rugby Club. Forty four men’s, women’s, collegiate and high school clubs from all over the Midwest and Mid-Atlantic traveled to Pittsburgh to participate in the largest Steel City 7’s Tournament to date.

The day was filled with rugby action across five fields at the McKinney Soccer Complex. The weather was great for rugby; the temperature stayed mostly in the high 70’s and every time the humidity seemed to cling in the air, a small pop up rain shower would occur for a few minutes to cool everyone down. In the afternoon, the sun appeared and remained out for the entirety of the playoff rounds. 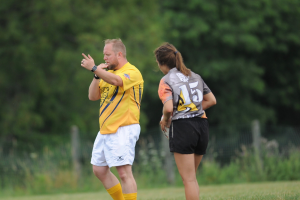 The High School girl’s competition displayed the talents of young women from across western Pennsylvania, Ohio and even Indiana. After a few rounds of pool play and some great playoff round matches, the ladies from Carroll High School in Fort Wayne, Indiana were able to win the Cup Championship in a very entertaining final match.

The Men’s Pool consisted of twenty four teams from all over the area including several teams with Pittsburgh Forge representation. At the conclusion of pool play, the division was split into three brackets to compete for the Cup (1-8), Plate (9-16) and Bowl (17-24). The Steel Dragons, a Franciscan University alumni side, were able to win three consecutive games in the playoff rounds to clinch the Bowl Championship. In the Plate Championship, the Pittsburgh Forge’s second side fell to a solid Cleveland Crusaders side to take second place in that bracket, tenth place overall. 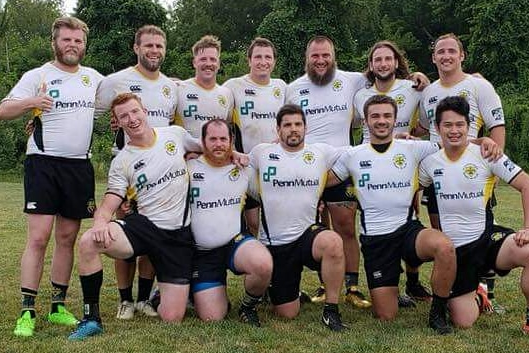 The Cup Championship displayed some great area rugby talent. The semi-final rounds pitted a Woodland Hills Alumni Squad, boasting several Pittsburgh Harlequins and several Pittsburgh Forge players against the Ankle Takers, a team made up of alumni from Baldwin Wallace University. Both sides had been dominant all day and after a superb back and forth match, the Ankle Takers were able to squeak by Woodland Hills 32 – 31. On the other side of the bracket, the Pittsburgh Forge’s first side took on the Pittsburgh Pandas, a side that boasts mainly Pittsburgh Harlequins and some local area collegiate players with ambitions to play in Mid-Atlantic 7’s qualifiers. This game would be far less competitive than the other semi-final match with the Pittsburgh Forge dominating the Pandas by a score of 35 – 12. In the Championship match, the Ankle Takers and the Forge battled back and forth the entire duration before new Forge player, Cory Hushon, was able to dot down a try to end the game in favor of the Forge. Pittsburgh was able to retain their Cup Championship as Pittsburgh Rugby Club won the tournament in 2017 and the Forge defended that title in 2018. 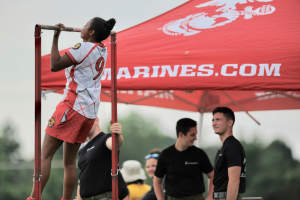 Forge Lady Alyssia Moss doing the pull up challenge at the USMC booth.

The tournament was excellently run by first year Tournament Director, Steve Joachim. Additionally, the efforts of all of the Forge volunteers must be commended. Club Interim Treasurer Olivia Lindsey managed the day’s finances in addition to manning the grill all day. Club Interim Secretary Corey Jacobs assisted Stephen throughout the day and worked seamlessly with tournament sponsors United States Marine Corps and vendor Steamroller Rugby Supply. Interim President Neil Reynolds managed the athletic training staff, donated generously by Forge sponsor East Suburban Sports Medicine Center (ESSMC). Additionally, the Forge Women’s Coach, Jason Edsall, served as an AT and as a referee later in the day. Forge Director Bill Marnell assisted in organizing the tournament’s referees and served as a referee himself in addition to several other club members who volunteered their referee services thorough out the day; Alex Gralia, Mike Dean, Dan Houlihan, Nick Cardamone, and Joe Piszczor, many of whom both played and refereed.

The day went off without a hitch, besides running a little behind. Following the tournament, a social was held at nearby North Park featuring beer from Imperium Brewing, owned and operated by club members Ben Carozza and Ross Carnhart. The party then moved to Rugger’s Pub in the Southside for a night cap for those that were still vertical. All and all… a great day of rugby.