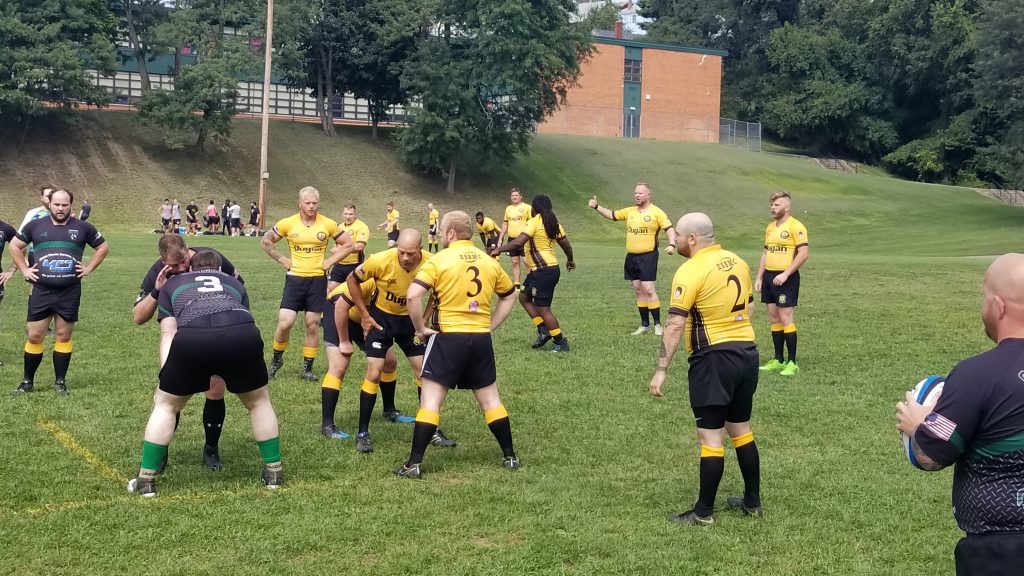 Pittsburgh Forge D3 defending against a Greensburg Mauler lineout during the first half of their 62 – 12 win on Saturday, August 25th.

PITTSBURGH, PA – The Forge Men welcomed the Greensburg Maulers and the Syracuse Chargers to Pittsburgh to open up the 2018 – 2019 Competitive Cycles. After a long spring, summer and preseason, the Forge were eager to earn their first regular season wins as an organization. D3 kicked off to Greensburg under sunny skies at 12:00 PM at Phillip Murray Field followed up the D2 kicking off to Syracuse at 2:00 PM under slightly more cloudy skies.

After winning the toss, the Forge elected to kick the ball to begin the game. After just a few minutes, the Forge was able to gain possession and spring center Stephan Patterson (PITT) free through the Greensburg defense. He put down a nasty stiff arm into the chest of the Mauler defender and powered his way into the try to open the scoring for the Forge. Flyhalf Al Cochran (PITT) would nail the conversion and the Forge were off to a great start.

After receiving the restart kick, the Forge was able to drive down the field once again and force a Greensburg penalty near the goal line. Scrumhalf Nick Cardamone (SRU) was able to take advantage and jot down his first try as a Forge player. Once again, Cochran was true and the lead was extended to 14. A few minutes later, Nick’s brother Tony Cardamone (SRU) was able to jot down his second try since coming back to Pittsburgh after playing several years in Orlando. The conversion was missed, but the Forge lead was up to 19 points.

Greensburg would answer back a few minutes later with a converted try, but Corey Jacobs would find space out wide and jot down his first try as a member of the Forge. Cochran would nail the conversion and then the Forge was attacking again off the restart kick. Powerful Forge forward Lance Reaghard would take a pass from Nick Cardamone on a penalty play and touch down his first career try. Finally, before the half, Patterson would find space again in the back line and touch down his second try of the contest. Cochran would make good on the conversion and the Forge took a 38 – 7 lead into the half.

With the solid lead, the Forge then focused on clearing their bench to get as many players as possible some playing time while resting some players for the Division 2 bench. Shortly after the restart, Tony Wilson (Woodland Hills) was able to break the defensive line with more tough running and set down his second try as a Forge player. Cochran would hit the conversion. Jonathan Dutton (PITT) would pick up a try after a nice carry from Tony Cardamone to extend the lead even further with a Cochran conversion. Patterson would add his third try of the day about 15 minutes into the second half which would extend the lead to 57 – 7.

Greensburg would add a try about half way through the second half, but missed the conversion. Captain Bill Marnell (Cal U) would break the defensive line and then offload to replacement flyhalf Devin Zangaro (IUP) who sat down his first try as a Forge player. Devin would miss the conversion and close out the scoring. The final read Pittsburgh Forge 62 – Greensburg Maulers 12. 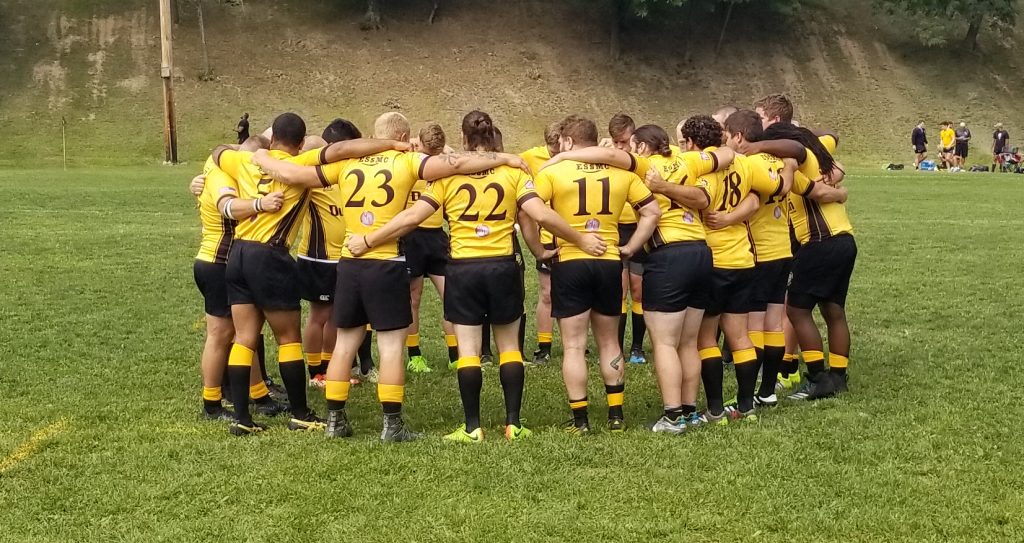 After a bye next week for Labor Day, the Forge D3 men will travel to Edinboro, PA to take on the Presque Isle Scallywags in their home and season opener. Presque Isle is a relatively new club, created from the ashes of the former Erie Rugby Club. This may likely be the biggest test for the Forge D3 side during league play this season.

Man of the Match: Stephan Patterson (1)

For the second match of the day, the Forge D2 side would host Syracuse. Both teams would use the first few minutes of the game feeling each other out before the Forge were awarded a penalty and kicked the ball into touch deep in the attacking zone. From the lineout, the Forge were able to retain possession and maul the ball into the try zone were veteran lock Sam Angelo (SRU/ IUP) was able to touch down his first try of the regular season after scoring last week against Wheeling Jesuit. A few minutes later, the Forge would be deep into Charger territory once again, but this time flanker Alex Gordon (SRU) would find some space and touch down his first league try for the Forge after scoring against Scioto Valley the first week of competition. Both conversions would be missed, but the Forge were quickly out to a 10 – 0 try after the first 15 minutes.

At the 18-minute mark, Clark Hoopes (UMass Amherst), who had a great weekend last week at Wheeling Jesuit, would touch down his first try of the season after dotting down two in the preseason test last week. This time, Andrew Knuttel (PITT) would nail the conversion before a scary moment in the scrum a few moments later would have him exit the game early. Knuttel’s substitution, collegiate teammate Jonathan Dutton (PITT) would come on and fill in admirably after playing fifty minutes in the D3 match earlier in the day. He would earn a card at the 35 minute mark for a dump tackle, but the card wouldn’t be too costly as the Forge held the Chargers back even down a man for ten minutes. Scrumhalf Rous Kluever (PITT) would add a try and a conversion for the Forge before half and extend the lead to 24 – 0 at the break.

After the half, David Ashline (PITT), playing flanker today, would set down his first league try for the Forge. Shortly thereafter, veteran forward Derek Neubauer (SRU) was able to take a nice feed from Kyle Franklin (UIC) to place a try down directly under the goalposts to ensure an easy Kluever conversion. Syracuse would score a converted try at the 51-minute mark, but by this point the lead was too much, 36 – 7 at this point. Alex Gordon would add his second try of the day for good measure followed by rookie wing Julyan Jenkins to close out the scoring with eleven minutes remaining.

All afternoon, the Chargers had no answer for the smothering Forge defense lead in the pack by Gordon and prop Jeff Muha and in the backline by centers Neil Reynolds (UPJ) and Patrick Dobbins (UPJ). Additionally quality performances would put on by winger Billy Gordon (Villanova), flyhalf Tyree Massie (Cal U) and prop Cody Fulton (Harrisburg); all played extremely well on both sides of the ball, but didn’t make the score sheet on this day. The score at the final whistle read Pittsburgh Forge 46 – Syracuse Chargers 7.

Pittsburgh Forge Men pause for a picture under the goal posts after defeating the Syracuse Chargers to open up league play on Saturday, August 25, 2018.