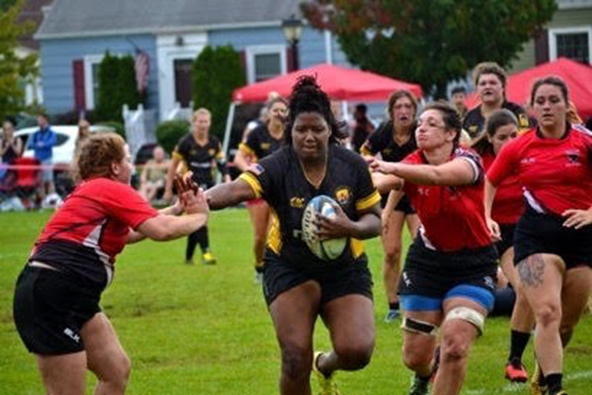 Beth Rose (Penn State) bursting through South Buffalo players as she rushes down the field.

Pittsburgh, PENNSYLVANIA – In the club’s second fall season, Forge Women’s Rugby has finished the fall 2019 season with an impressive 4-1 record, securing the second spot in the Midwest Women’s East Gold Division 2 standings. The Forge qualified for playoffs and will be traveling this weekend (10/26) to play the Cincinnati Kelts who are the top seed in the Midwest Women’s East Green Division 2 standings. It is sure to be a physically demanding, fast-paced, exciting game.

Last year in their inaugural season, Forge Women’s Rugby boasted an undefeated regular season and powered their way through to the second round of playoffs. The team returned to the competitive Midwest East Gold stage this fall with extremely high expectations and a work ethic to match. This fall, many new players joined the team and jumped right into the rigorous training that pushes the team to maintain their dominating field presence. Both new and returning players, as well as a returning coaching staff, were eager to jump into the club’s second season with their impressive, albeit short, history pushing them forward.

The season began with an away scrimmage against a Division 1 opponent, Philadelphia Women’s Rugby Football Club. The Forge were unsuccessful in this match up, but the team agreed that it was valuable to start the season with a tough opponent. Many new Forge players were able to see the pitch during this friendly match, and it proved to be a valuable opportunity for the Forge to fine-tune strategy and game plans for the upcoming league match against South Buffalo.

On September 14, the first league match of the 2019 season, the Forge traveled to Buffalo to take on South Buffalo Women’s Rugby. The Forge was able to win this match with an impressive score of 53-22. Highlights of this game include 2 tries and 4 conversions from Morgan Haggerty (Ohio Univ.), 3 tries from Scout Cheeks (Penn State), and 2 tries from Mackenzie Dirlam (Pitt).

Immediately following this game, the Forge’s second side made their debut and took the pitch. Forge women were able to play Burlington, a competitive Canadian club, as the mechanics of this newly formed second side fell into place. Burlington traveled to Buffalo for this match up, and the team was able to have a thorough showing of athleticism and skill.

On September 21, the week following the decisive victory over South Buffalo, the Forge hosted the Cleveland Iron Maidens. The Forge received their second league match victory, besting the Iron Maidens with a score of 63-10. In a great showing of teamwork and camaraderie, 6 different Forge players were able to score tries against Cleveland. 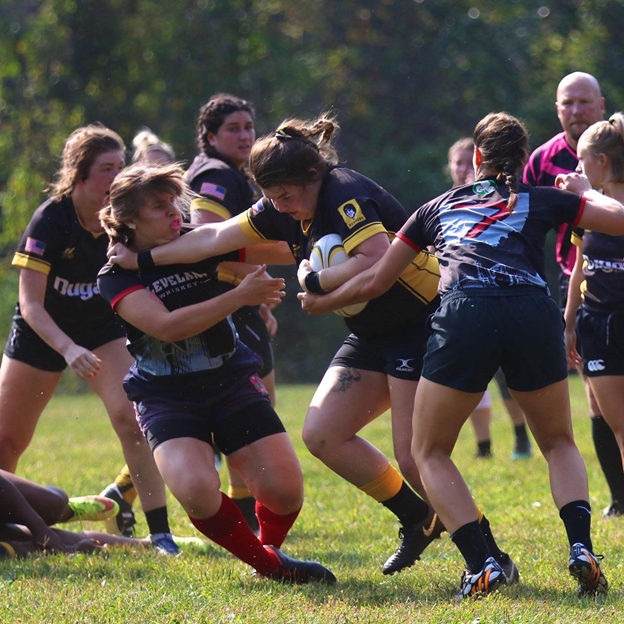 After the completion of this game, the Forge’s second side squared up against the Indiana University of Pennsylvania Scooters (IUP). The game was fast-paced and physical, and the Forge faced a tough opponent. IUP is a well-established, historically successful collegiate club. Forge was able to defeat IUP, and the second side enjoyed a win.

On September 21, the following weekend, the team traveled to Buffalo yet again to take on the North Buffalo Ninjas. In the first half, both teams held their own and refused to give up many points. At half, the score was Ninjas 7, Forge 14. After a quick, leadership-driven effort to regroup, the Forge returned to the field with a unified energy that proved to be contagious. The Forge scored 6 tries in the second half. Impressively, Mackenzie Dirlam made all 8 conversion kicks.

After their previous wins and a wholly successful season, the Forge next enjoyed a bye week and a chance to recover and regroup after what has proven to be a physically demanding season. On October 12, Forge women hosted Buffalo Rugby for the initial match on the second annual Forge Day. All Pittsburgh Forge teams were able to enjoy playing at home, and as an additional bonus, the Forge women were featured on USA Rugby’s 6 Pack Preview as a game to note over this weekend. Buffalo RFC and Pittsburgh Forge were both undefeated going into this match, and USA Rugby anticipated that this match would be “a classic match up of Unmovable Object meets an Unstoppable Force.” 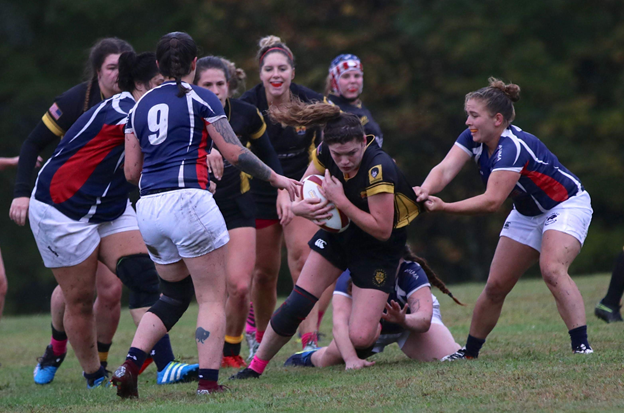 Mackenzie Dirlam fighting through Buffalo defenders in search of the try zone.

Unfortunately. Forge fell to Buffalo with a final score of 17-31. The team made their best effort to stay in the game – Mackenzie Dirlam scored a try and made a conversion in minute 80. This was the Forge’s first loss in a league match since the club was founded last year.

Immediately following the first side versus Buffalo, the Forge’s second side took the pitch to face off against California University Women’s Rugby (Cal U). Cal U, another well-established and historically successful collegiate team, showed the Forge a great match. Skilled players on both sides were able to excel and demonstrate excellent skills. Forge were victorious over Cal U.

In the final league match of the season, Forge traveled to Akron this past Saturday (October 19) to take on Akron Rugby. In a most impressive showing, Forge defeated Akron 70-0. On the heels of the dissatisfying loss to Buffalo Rugby, the Forge was pleased to gain some confidence and solidify their mindset as they move into the first round of playoffs this upcoming weekend. Stay tuned for playoff reports.