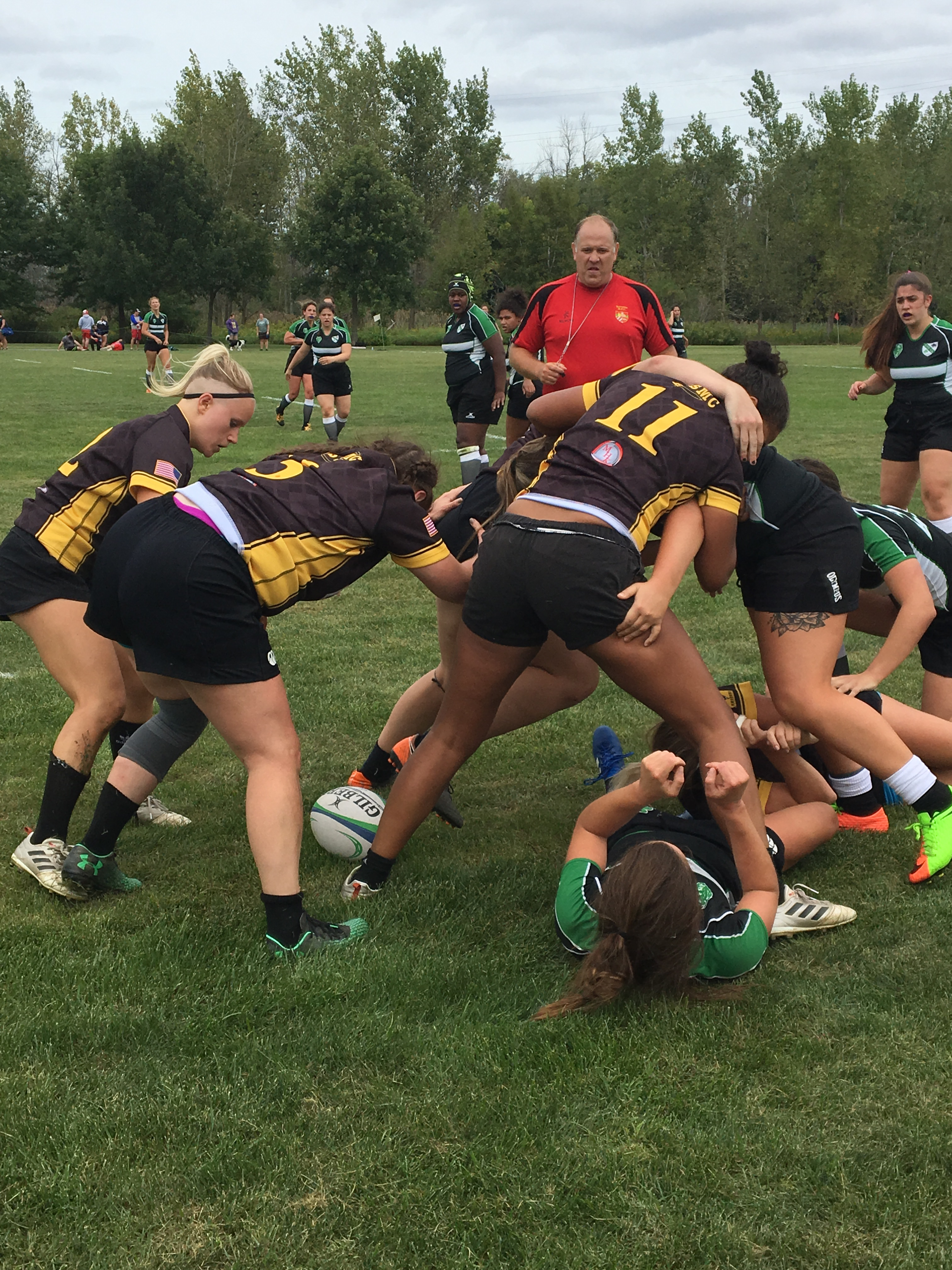 Wickstrom goes for the ball after a stolen ruck by Andrews & Correia.

BUFFALO, NY – The Pittsburgh Forge Women’s Rugby Club ventured to New York state for their first league match of the Fall season. Packed into several cars, the Forge Women traveled with 24 to the outskirts of New York’s second largest city. A chilly day with noticeable winds, the Forge welcomed the change from the hot and humid days that had plagued Pittsburgh.

Winning the toss, Chelsey Mitchell (captain, lock) requested the team kick off to South Buffalo. With a strong kick from Ashely Chipps (#8) at 12:35 PM, the game was launched and the Forge’s first league match began. However, it was a slow and arduous begining for the Forge. South Buffalo was chomping at the bit and their energy over-powered The Forge for much of the first half. Working with hard punches and quick ball, South Buffalo scored the first try of the game, exploiting gaps in the staggered Pittsburgh defensive line.

After that first try, the smoldering Pittsburgh energy began kindle. Kicking off to S. Buffalo once again, Pittsburgh was able to reclaim the ball. The forwards worked hard, making punch after punch into the S. Buffalo defensive line. With 12:59 PM on the clock, Chipps took a pick and go off of the 5 meter line and bruised her way to score Pittsburgh first try, a few meters outside of the uprights. Maddie Miller (fly half) sealed the try with a conversion, making the score 7-7: a tie game.

S. Buffalo was in no mood to be taken down so easily. Within the next ten minutes, S. Buffalo scored another try but was unable to complete the conversion, leaving the score 12-7. The Pittsburgh Forge were able to regain possession of the ball and once again, trudged downfield. Off of a five meter scrum, Chipps took a quick pick and go, touching that ball down at 1:16 PM, tying the game up. Miller’s second attempt at a conversion was unsuccessful.

The game finally settled into a back a forth pull: S. Buffalo setting strong rucks and making quick ball while The Forge’s conditioning and tightening defense helped stave off S. Buffalo. While marching up field, The Forge received a penalty option right smack dab in the middle of the uprights. The positioning was too perfect to abandon and a penalty kick was decided upon. With tension mounting as S. Buffalo scrambled to set up defense for the under-used penalty option, Chipps sent the ball dead center. The Forge finally pulled ahead, leaving the score to 12-15, Forge.

With the momentum of the last score behind them, The Forge moved like a steam train, chugging down the field. Sensing and channeling the momentum, Nicole Beswick (flank) conducted the forwards into a force that the S. Buffalo team could just not keep back. Within five minutes from the last try, The Forge forwards gathered the defense in, only to send the ball out in a most expectant back line. While ground was gained, S. Buffalo was able to defend against this line until prop, Beth Rose, looped on the outside of Chloe Correia (wing) and charged through the defensive line. Sprinting another 20 meters, Beth finished her run with a try.

S. Buffalo was quick to answer back, sending in a try and completing the conversion, making the score tighter than ever: 19-20, Forge.

However, Correia and Rose combination was not yet over. Not more than three minutes later, Rose slid into the back line between the outside center and wing. After a quick breakdown, Beth emerged with the ball, once again breaking through some of the defense, just as she did minutes before. Bogged down the remaining defense, Beth gave a quick pass to Correia (wing) who took it in for a try. Receiving the kick, The Forge pushed quickly ahead, exploiting S. Buffalo’s tiring defense. Punch after punch from the forwards yielding one more try for the Rose and Correia deadly combination, with Correia receiving a quick pass from Rose at top corner of the field. The score now was 19-30. Pushing back, S. Buffalo sent one more try up, now 24-30. It was the Forge’s game if they could only hold on for ten more minutes.

With few minutes to go, Dana Zimmerman (wing) made the final try of the game, securing The Forge’s win. Racing up the outside, having received a pass from outside center, Zimmerman zigged in and out of defenders until she found the try line 30 meters later, centering the ball between the uprights. With Chipps finishing the game with a conversion, the final score left S. Buffalo with 24 and The Forge at 37.

The Forge will face the Iron Maidens of Cleveland on 9/15 at noon for an A and B side match.