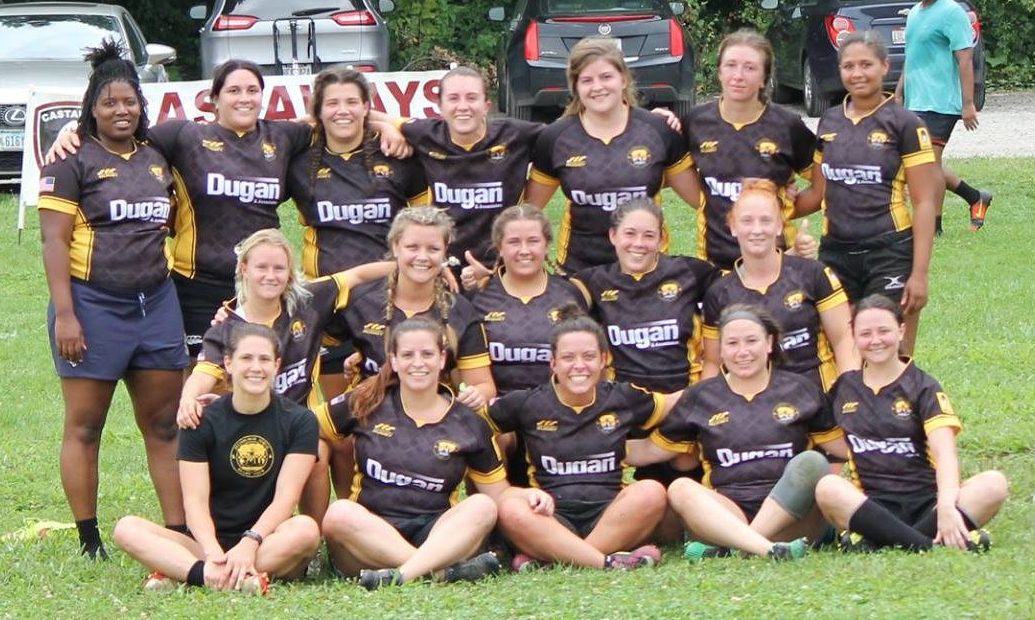 Pittsburgh Forge Women enjoy a a post-game picture after a commanding win over the Columbus Squirrels.

COLUMBUS, OH – The Forge Women traveled to Columbus, Ohio for their debut 15’s match.  Traveling with 16 able-bodied yet veteran players, the Forge was eager to test their mettle against what was once Scioto Valley, now Columbus Women.  The weather was typical of late August; overcast skies and a gusty autumnal wind created a great pre-season rugby atmosphere.  The ability to communicate amongst players would prove to be a challenge for both teams as a marching band’s drum and brass line practiced their half time performance just 20 meters from the pitch.

Having lost the toss, the Forge started the game with the kickoff; Columbus receiving the ball just after 11 AM.  Jessie Brewer (wing), made short work of their offense, snatching a ball intended for their back line, and taking it straight up the sideline for a try.  The conversion attempt, while centered, was unsuccessful. This would prove to be a trend for the first half of the Forge’s offensive game.

The Forge, now receiving the kick, was quick to set up their offensive structure. Scrum half, Chloe Wickstrom, orchestrated the forwards, reeling in the Columbus defense towards the middle of the pitch.  After just five minutes in to the first half, Wickstrom sent the ball right, past the forward pods and into the hands of the three-man back line.  The back line was able to draw in the remaining defense and sent the ball into the hands Jessie Brewer (wing).  Brewer raced down the five meter channel and scored her second try in the top right hand corner of the field.

Fielding the high and short placed Columbus kick, the Forge lost no time in charging down the field for their third try. At minute nine, Ashley Chipps (#8) took advantage of Columbus’s sagging defensive line, , darting forward with a pick and go off of a dying ruck.  Chipps charged downfield, defenders sucking in to drag her down.  Having slowed Chipps to a near crawl, it seemed a ruck was eminent; Chipps, however, twisted her body and gave a short pass to Chloe Correia (Wing), who then drew the last defenders out of the five meter channel, leaving Brewer to once again take advantage of that sideline to score her third and final try of the game.

Columbus, however, answered back with haste, using a standard pick and go off of an uncontested ruck to gain an impressive amount of ground.  Columbus’s #8 sprinted down the middle of the field, evading a few poor Forge tackle attempts for a 40 meter try.  Their conversion was made, and now, the score was 15-7, with 67 more minutes to go.

The pace of the game slowed as both teams began to test one another’s strength and endurance. Several harrowing scrums and somewhat dangerous rucks later, Chloe Correia blitzed the Columbus offense, intercepting a pass intended for their back line.  Hustling down field, Correia scored the Forge’s fourth try, about 15 meters off the uprights in the 28th minute of the game.

Near the end of the first half, Columbus took advantage of the Forge’s lack of post and pillar defense, scoring back to back tries.  Winded and with frustrations beginning to rise, it was at this point that the Forge’s communication seemed on a downhill slide.

After half time, spirits were improved and communication amongst players was back on the rise.  Having marched down the field, Wickstrom choreographed the forward pods and back line into an optimal position.  At the 58 minute mark, Hannah Zibert (Hooker) received a fabulous five meter pass from Wickstrom.  Zibert pushed forward, faked a pass to her outside, and then ran in 10 meters to score another try for the Pittsburgh Forge.  The score now, with a completed conversion by Maddie Miller (Fly Half), was 32-19, Forge.

Just four short minutes later, the Forge found itself yet again near Columbus’s try line.  Several Forge pack members cycled in and out, pulling in many Columbus defensive players in.  After several attempts of scoring amongst the pack players, Beth Rose (Prop) came out victorious, raising the score to 39-19, with again, Miller making the conversion kick.

In the last 10 minutes of the game, Columbus was able to send in one more try with a successful conversion.  However, it was Forge’s Carrie Dvorsak (#8) who had the last say in the final four minutes of the game.  Keeping power in the otherwise fatigued forwards, charging through two tacklers, twisting to keep their arms from making a successful wrap, Dvorsak centered the ball right between the uprights, setting up Miller to make one more successful conversion.

On September 8th, Forge Women will travel to Buffalo, NY for an A side and B side match.